“The Mob on TV” is on view in the Museum’s retail store and showcases costumes and props from “The Sopranos,” “Boardwalk Empire” and “Breaking Bad.”

“Nucky” Thompson’s “Death Suit”
A three-piece suit worn in the series finale by Steve Buscemi, who played real-life Atlantic City crime boss Enoch “Nucky” Johnson in HBO’s “Boardwalk Empire.” The suit features a bullet hole where the character was shot. “Boardwalk Empire,” created by Terence Winter and executive produced by Martin Scorsese, chronicles organized crime in Atlantic City and beyond during Prohibition. The show’s five seasons (56 episodes) ran from 2010 to 2014.

“Boardwalk Empire”Tommy Gun
This submachine gun prop was used by “Nucky” Thompson in season two, episode eight of “Boardwalk Empire.” In the episode, Thompson receives crates of Tommy guns destined for the Irish Republican Army, which is rebelling against English rule. In episode nine, Thompson travels across the Atlantic to deliver the guns, which are smuggled inside a coffin that presumably holds his deceased father’s remains.

On-screen Gas Mask
This gas mask was worn on screen during meth-cooking scenes in “Breaking Bad.” The drug-making chemistry in the show was quite accurate, from the rudimentary production processes shown in the early episodes to the “super-lab” scenes in later seasons.

Tony Soprano in Casual Mode
A costume worn by James Gandolfini, in his role of Mob boss Tony Soprano in the HBO series “The Sopranos,” during season five, episode two. “The Sopranos,” created by David Chase, premiered in 1999 and ran for six seasons (86 episodes). The stories and characters were inspired by real-life Mob crime families in New Jersey.

For more information about the Mob in pop culture, visit The Mob Museum’s blog here.

The Mob Museum is located on 300 Stewart Avenue.

This article originally appeared on KTNV.com on March 4, 2020. Written by Amy Abdelsayed for KTNV 13 Action News. 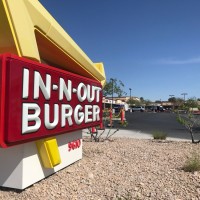